I picked up a Mouse King Nutcracker for a Christmas present and decided to touch it up a bit. But I get obsessive, so it spiraled out of control. 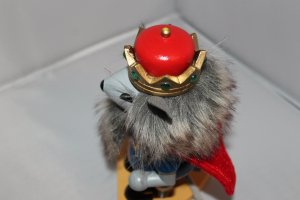 This is the original. He’s not bad, but there were a few things I wanted to change. Mostly, you could see the nutcracker teeth and the glue beneath the gem-thingies.

Anyway, I started to take off the fluff and round things to re-do them but thought, “Oh, I could also do [this] and [that]”. I decided to make him a white lab mouse king. So I guess I’ll go through what I did end up doing. While making them, I used the camera in my phone, so sorry about the blurry ones. 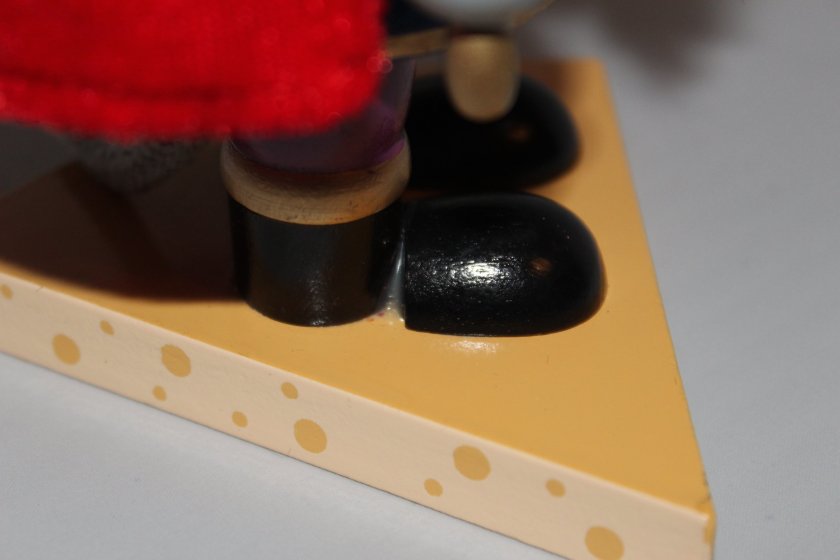 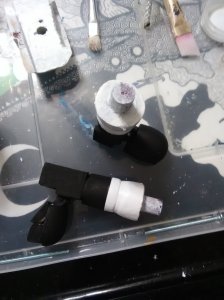 The feet looked like they could use some work. The legs were actually pegs inserted into the base, with the rest of the foot pasted on in front. I removed those, put a hinge on the base of the leg to the foot, and buffered those with some wood.

I decided to use fur and give him an actual coat, but I still wanted to have a good place for the belt to sit. So I decided to just have the lower half of the torso painted white with red dots like boxer shorts. For this, I sawed and sanded the torso apart where the belt is, removed the nutcracking part so that I could paint everything, and added a peg and holes so that the torso and chest could separate. It can rotate on the peg too. (Below left.) 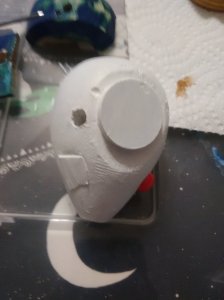 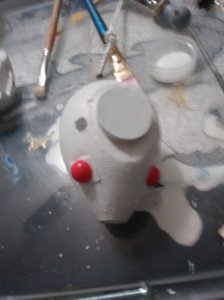 The head was nailed to the chest, so I made new wooden pieces for a peg thing similar to the torso/chest so that the head could rotate. The head and crown were two pieces, so they were easy to separate. I decided to make the crown attach with magnets, and that’s what’s at the top of the head. I flattened parts for the eyes but over-flattened one side and had to fix that.

I gave the arms elbow hinges to move the coats on and off. I also made them swing and have some rotation out at the shoulder. 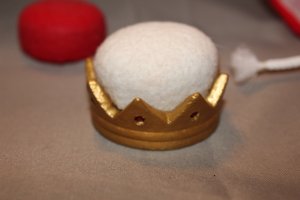 The sword parts can be removed. The crown has two different tops, red or white, with the actual top part also connecting with magnets. The gems are set from the inside and are interchangeable, 6mm diameter beads. I was going to use garnet, but those were too dark. I used bright red bamboo coral beads instead. There’s also a cape. 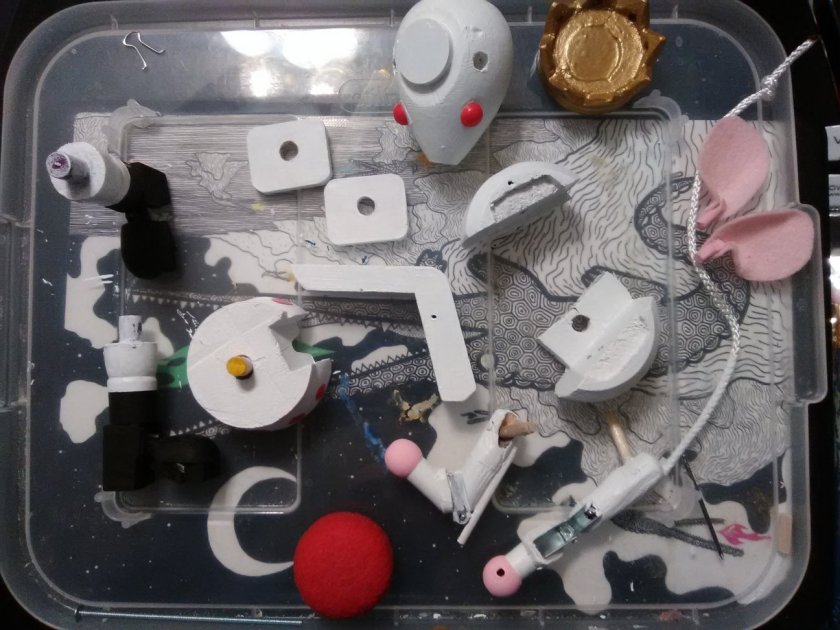 These are all the pieces laid out. On the right are the tail and ears. The ears are just pegs with pink felt. 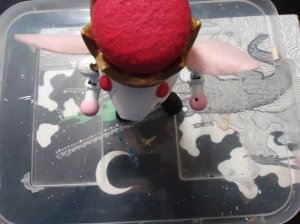 Here he is put together without fur. I was glad he could stand easily. 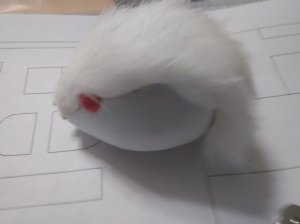 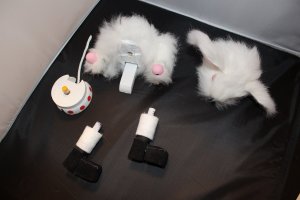 I think I only have the one fur-in-process picture, but I have the basic, final pieces with fur both apart and together.

I used white felt for the legs instead of fur, so that the stockings could fit over it. The legs have part of the boots glued on, but the side things fit over the rest and the stockings and are held on with elastic rope ties. 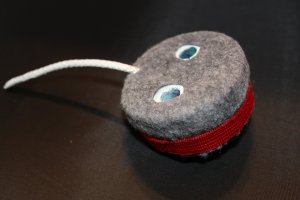 The “pants” go over the torso. It’s grey felt held in place by a red elastic “sash”. 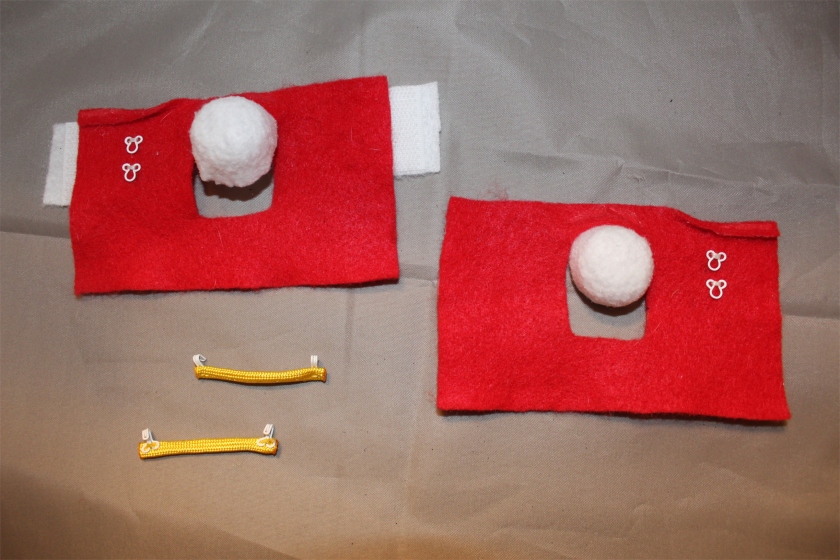 His first outfit is more of the traditional military whatever coat. I gave him kind of puff shoulders, but no sleeves. Also, it separates front and back, because I thought I’d need to do that to get it on and off.

Here he is all kinged out.

The other one is just a simple blue coat. I realized I didn’t need it to separate in the back, but I didn’t want it to be too simple. For some extra style, the front part is like a lace cravat thing. 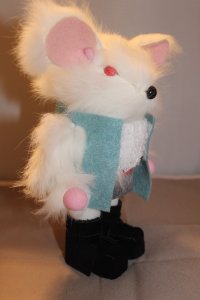 And here he is all casual decked out.

I think he turned out ok. There were a lot of pictures and parts; hope I went over everything. Late merry Christmas yo. 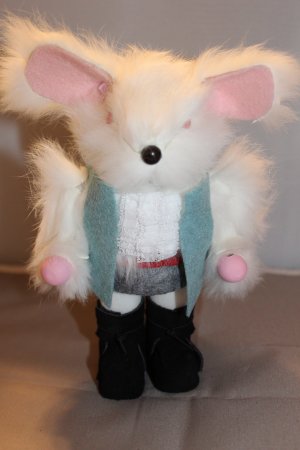