Well, awhile ago my flash drive died (quite thoroughly), and I lost a lot of recent stuff that I hadn’t backed-up yet. That and some other stuff bummed me out, but I hadn’t realized I’d been off here for so long. So here’s some random, fun stuff.

I made Satoshi Kamiya’s Winged Kirin/Qilin! I think it came out ok. I used paper that’s too small again.

There’s an artist named Hachiken (Haruka Hashimoto) on Twitter. I love their Blastoise, and there’s a crease pattern. So I made one; he’s great!

I wonder if I should make the Charizard too?

…got sidetracked while writing this and made him in the interim. He’s great too! The way I painted the square caused the paper to be a little thick, so I had some trouble getting the tail and wings to stay up.

Last, Paper Mario: The Origami King came out a few weeks ago now. I unraveled (and re-raveled) my Bowser to possibly do diagrams of him sooner or later. Also, I made Nintendo’s origami Princess Peach from the how-to video on their Japanese website. I used her, my Bowser, and some game sprites to try greenscreening and make a little cartoon. It’s kind of dopey, but I hope it makes someone smile.

I was really proud of this Bowser I came up with, but I had trouble getting the face. I thought I’d improved it a lot, but someone pointed out that it was still bad. Anyway, while I debated on putting it here, I put a lot of work into it and maybe can adapt it to a kappa or Gamera.

There’s an initial version and a final version. Also, I painted them so it would be more clear they’re supposed to be Bowser, and I’m showing both painted and unpainted. 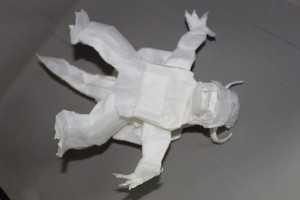 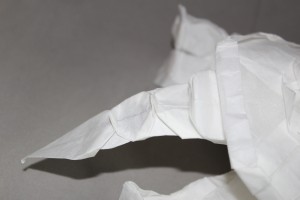 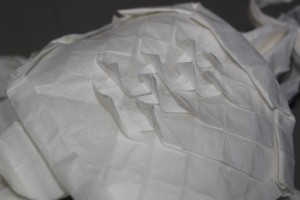 The face was actually a bit different before painting because the paint reset the paper a bit. I couldn’t get it back after that. 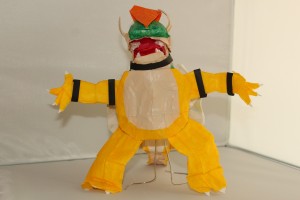 (Everything above this is the initial version, and everything below is the final version.)

Apart from the face, most of the attributes between versions are the same with only slight differences. I moved the shell spikes out from each other in the final one, basically to as far out as I was comfortable with. The tail is slightly different between versions. I also put little bands on the first one, but those are just separate strips. 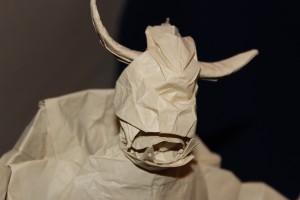 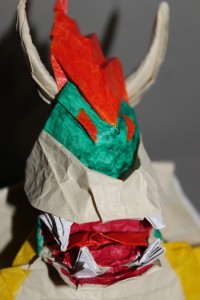 For the final version, I painted it beige (the colour that the mouth/nose, horns, and spikes are) before folding to make things simpler. I tried to make a more structured face, but the bigger problem is that I don’t do curves very well. I tried to offset that by making the hair sharply geometric, trying to give it a more cubist style overall. 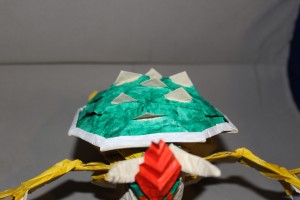