Challenge 31 is Seiji Nishikawa’s 15°-Based Cat. I’m not sure how you name models by degrees, but I can see the tail and out from the center to the head both have 15° subdivisions.

The head of my sitting, blue cat is more like the original model. However, he should be standing like the green one.

I like the cat, but he’s more of a puzzle than grandiose. So here are a couple of models from Works of Seiji Nishikawa: his Tiger and Wagtail. 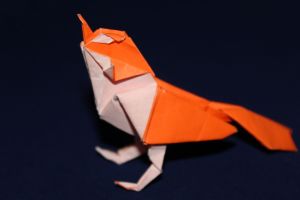 The tiger keeps flattening out, so I tied a rope around him. A wagtail is a little bird. 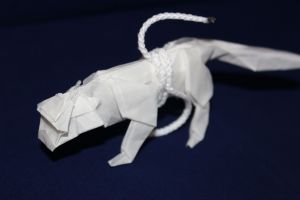 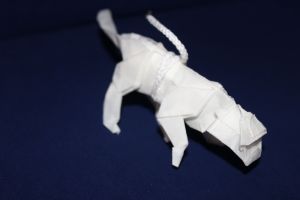 Challenge 30 is Seishi Kasumi’s “Mask of Ape”. It looks more like a monkey mask to me. The Japanese title of the model is “猿”, which can be monkey or ape, so I guess it can be either.

This is a pretty nifty 3D model. I initially didn’t like it too much, but it grew on me. The first time, I used rigid paper to hold the 3D shape, and, the second time, I used the flimsy paper I usually use. Both times I drew in a lot of the lines to make it easier.

This first time I drew in the lines with red for mountain folds and blue for valley folds.

Since I was better at keeping track the second time, I just used yellow highlighter to draw in lines. It lit up when the camera flash hit it for a neat effect. I hope it works the same way with a black light. 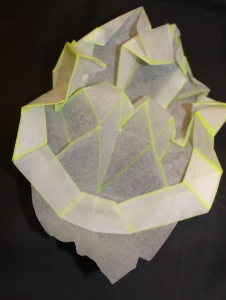