The fourth crease pattern was developed by Noboru Miyajima. It’s a neat model that uses one square of paper for two characters, a Knight on a Pegasus. I guess the knight would be Perseus, as Pegasus is created by Medusa’s blood (one way or another) when Perseus beheads her. I never thought of Perseus wearing a lot of armour (he gets his shield, hat, and shoes on the way, so I always think he travels light, but maybe he traded them in). Some paintings (such as this time-lapse painting) do have him armoured up. Sculptors tend to disagree. But “Naked Dude on a Pegasus” would probably require different points of articulation. 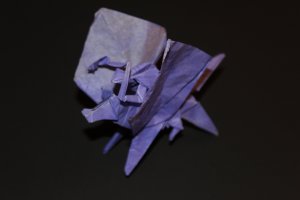 After I folded the crease pattern, I actually ended up a bit stuck. I folded it fine, but it’s sometimes hard to show specific details in a crease pattern. Instead of a dude on a winged horse, I had more of a squid with too many tentacles. Luckily, Issue 73 had complete diagrams of this model, so I folded that, then went back to the crease pattern to finish it.

I used nearly the same colour paper, so they’re kind of hard to differentiate. I’m pretty sure that the crease pattern one is a bit more streamlined, as you can skip a lot of steps that are more for reference.

One thought on “Crease Pattern Challenge 004”