The next couple of models from Kamiya’s second book are a Raccoon Dog and a Lion.

The Raccoon Dog is listed in Japanese as Tanuki, which is also a word in English. I wonder if they didn’t use it because Super Mario Bros. 3 helped popularize the word in English but spelled it “tanooki”. Or maybe they just didn’t think it was popular enough for people to recognize. But how many people recognize “Cyclommatus metallifer”, anyway? 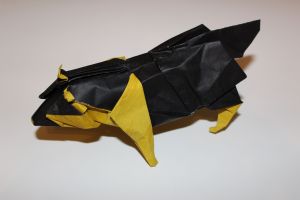 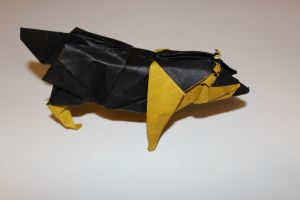 Moving on, Kamiya’s tanuki has a great raccoon-esque colour change and adorable little ears. It does not turn into a Jizou statue (that I am aware of). 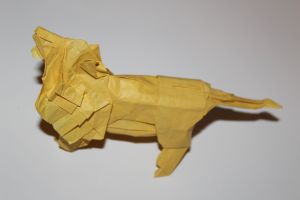 The Lion is one of the more grandiose models in the book, not that there are a lack of them. The regal countenance and fancy mane make it much more memorable than other origami lions. You may have noticed that, with the details, I had to go back to the thinner paper. The head gave me a bit of trouble, but the mane and face are pretty slick.

UPDATE: This was not correct. But, as for what they did: Really? I still like the show, and they had some good moments there. But does it bother anyone else that their solution is essentially the same thing that caused a black hole at the end of the first season? Or how about that this is the same plot as a (much better executed) Futurama movie? At least they’re doing the Flashpoint thing now. Maybe they’ll have Captain Cold fill in for Batman.