I wanted to do the next Crease Pattern Challenge next, but, after I finished it awhile ago, I only took a couple of pictures that are a bit blurry. Sometime between then and now, I lost the model. So I’ll have to whip it up again. Instead, I’ve got something I came up with. 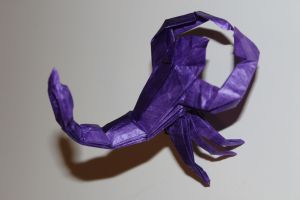 This Scorpion is another one of those models that just kind of clicked. I had been working with this base pattern a lot, and I just thought, “Hey, scorpion”. It is an extremely simple model but still looks really good (I think). Again, I figure others have come up with a similar scorpion due to its simplicity. Hopefully, this does not lead to some kind of vendetta, like in Kill Bill, Titus Andronicus, or Attack of the Killer Tomatoes. 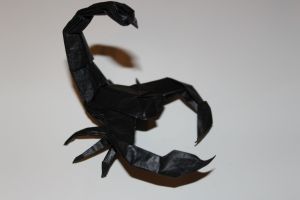 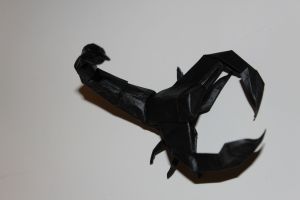 I was also going to use this scorpion for the logo. I have it in a wooden cage in the picture below and changed it to grainy black and white (shown below). I liked it because it wasn’t immediately clear what it was, but I ended up going with the exact opposite in a stark cartoon scorpion outline thing.

When I first made this scorpion, I thought it looked a bit similar to a scorpion I’d seen before, but I couldn’t find it anywhere. I was organizing stuff and noticed a previous post here with random models.  It was this scorpion by Robert Lang from The Complete Book of Origami. Yes, I had folded and put it in a previous entry and still couldn’t find it. I actually searched for “Robert Lang origami scorpion”, but he has gone on to bigger and better scorpions.

So, I folded them both at the same scale to compare. I don’t think they’re too similar. The similar feature is the tail, which radiates out from the dead center of the square in both models for length. The arms, legs, and head are completely different. However, the tail is such a prominent feature they do look similar.

The biggest difference between them is that I didn’t realize there is a difference between legs and arms in arachnids. Specifically, it’s not “eight limbs”, so a scorpion has both eight legs and two arms. You’ll notice, Lang’s scorpion is a scorpion, in that it has eight legs and two arms with pinchers. Not only does mine have only six legs, the arms don’t have pinchers. I know I google imaged “scorpion” while making this, so I’m really not sure what happened. Since the arms were a little long, I decided to pull some legs out of them.

I have the initial attempt above on the right, lined up with my original on left and Lang’s in the middle. Below is the updated scorpion. 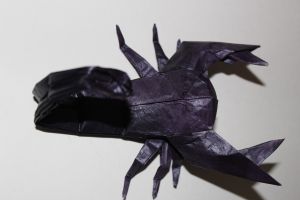 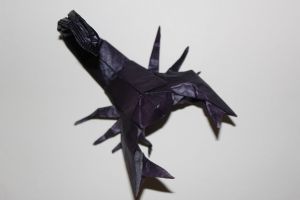