So far, only one person has asked about this one, but I had found this interesting before anyway. I nearly put these with the original post. I double checked and wrote up my notes so they’re (hopefully) understandable.

This is a possible way to get the reference lines, but there may be a simpler way. I want to point that out because this model strikes me as having lines in more random places than most crease patterns. That is, it seems more like a model that has steps like in diagramed models. Creases found based on previous steps would be much easier to fold/follow. However, it may just have intentionally difficult to find reference lines for the challenge part.

My finished model (from the double checking) follows the reference line diagrams below. 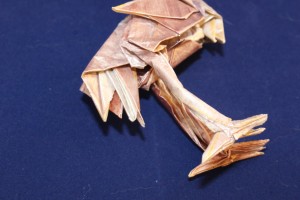 Tanteidan’s 18th crease pattern challenge is a little different and pretty neat. Masashi Tanaka made four variations of the traditional orizuru crane model. The first two, labeled “A” and “B”, have squared backs, with B having twice as tall a back as A. B also makes me think it would make a good hat, but I have no idea why. 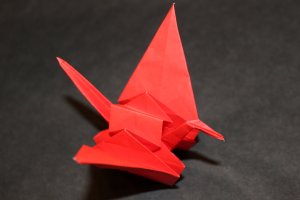 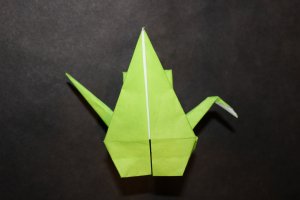 N is more complex than the others (I still like C more), with a normal crane back but cubes for wings. 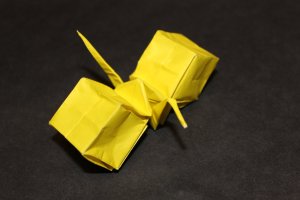 C is my favourite of these. Its back is a cube. My folding of these last two didn’t end up as well locked into place as the examples, so I also have this one’s base clamped to show how the cube should look. I let the bases do whatever because I liked how it looked, but Tanaka’s examples seem to have shorted bases. I wonder if that would help lock them. 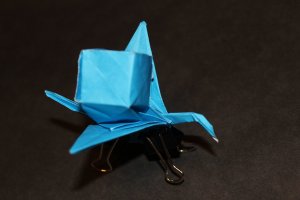 I also have a couple more Tanaka models: his Cat from diagrams in Tanteidan magazine #95 and Rat from Tanteidan #106.

I had trouble with the cat’s face, but it’s an interesting way to make it, with the sides seeming to imply whiskers from the nose. For some reason, feline faces are pretty hard to do well in origami. My main problem was if the bottom flap was for a mouth and how to shape it.

Tanaka’s Nezumi DASH! has a pretty unique starting step to help keep the model free of random creases. Some of the initial precreases are done on an alternate square (of the same size) then transferred to the model square by lining the two up. I was surprised. The DASH! is because if you squeeze his tail up to his body and let go, his tail will propel him forward.