I had wanted to post every Tuesday and Friday, but I’m probably only going to be able to do Fridays. I thought some random ones might be fun. Anyway, I had these in my camera.

This Dimetrodon was designed by Fumiaki Kawahata and is in his book, Origami Fantasy. I got the book just before it went out of print and have made nearly every model (I think). I’m surprised I can’t find more lying around (the stegosaurus is especially ingenious); they’re all great models and fun to make. This dude’s spine is awesome. The Dimetrodon, I mean. I have no information on Mr. Kawahata’s spine. 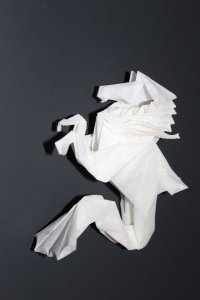 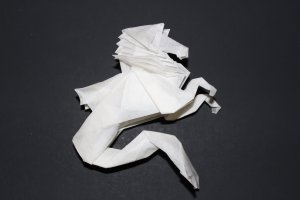 Diaz’s origami is usually wavy. Not wavy like the more abstract origami that’s all waves, but very clearly wavy, as an interesting aspect. Around 10-15% wavy. A Hippocampus is a mythical water horse, and this one (from Origami for Interpreters) incorporates wavyness particularly in the mane turning to gills, the horse nose-face-whatever, and the fish-foot-thing. Sometimes, my descriptions can be a little lacking.

Lastly, I have some designs created by Robert Lang. I like most of Robert Lang’s origami. The “Opus” numbering he has kind of rubs me the wrong way. But it’s fine. Really, it’s just that, when I folded his Assyrian Bull, it didn’t stand under its own weight. I mean, that’s fine. I should have been able to tell its legs couldn’t hold it from the crease pattern. So, it’s fine. I had it hung over my desk for a while, with a few of Takashi Hojyo’s Geistkämpfers. Their arrows were aimed at the bull. 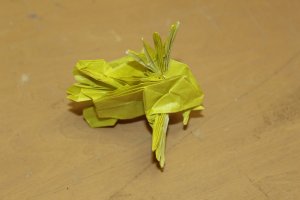 The Lionfish and Hermit Crab are from Origami Sea Life, which was a co-book with John Montroll. John Montroll has many clever designs, many with color changes, which you do not see here. Maybe another week.

I don’t know exactly why I like the Lionfish so much, but I do. Maybe because he’s so pointy?

I had gotten some opalescent paper that I didn’t know what to do with but remembered the Hermit Crab! He’s adorable but a little hard to photograph.

This last one is Lang’s Scorpion from The Complete Book of Origami. He has several other scorpions, but I like this one the most of all the ones I’ve seen. He has a good face. Also, I don’t much like wet folding.