I mentioned in the last one of these that I got the book Works of Satoshi Kamiya 2, and I would continue these scaling entries (27.9 cm square paper) with those models. Rather than having a new comparison model, I’ll still show them next to The Yellow Bird for scale. I figure that’ll be easier to compare models between books, and I just like that model a lot. 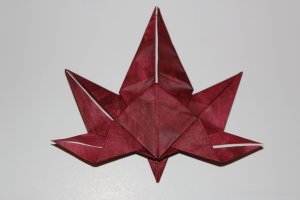 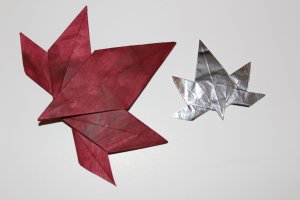 The book’s first model is a Japanese Maple Leaf. I made it out of a thicker paper (which I tried on several other models, but it wasn’t always a great idea) and out of shiny silver paper, for some reason. The red one is the scaled one. It’s a simple model but elegant on both sides 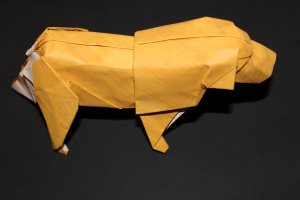 Second is his Golden Retriever. He’s nice, but what to say about him? I mean, I like the dogs, but Golden Retrievers don’t really have a standout feature, like a smooshed face or an antenna. He kind of reminds me of the later lion model (I’m not sure why, other than the colour), so, maybe he’s lionhearted? 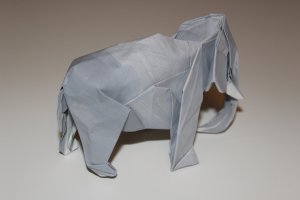 The third one (and last today) is an Asiatic Elephant. The trunk is supposed to curve into implied eyes, but I didn’t do that too well. The reverse-coloured tusks make me think it has a happy feel to the face, but maybe it’s my imagination.