Another Puchi Dragon Quest monster is the Puchi Fighter. He is the warrior class leaf dude. 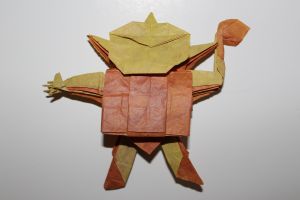 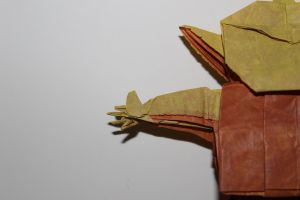 His yellow versions are the プチファイター (Puchi Fighter), FoFightr, and Conkerer in the DS version of Dragon Quest V. The blue/grey ones are コロファイター (Koro Fighter), PodFightr, and Battle Pip. I really don’t get why they decided to rename the Koro Hero to Pip Fighter and the Koro Fighter to Battle Pip. I guess it doesn’t make much difference when the yellow/green ones are all Conk-puns, but I still don’t get the name shell game. Is “Battle Pip” a thing? Like an expression or brand of cola?

I actually made this one last (after the Puchi Mage). I couldn’t get the hat colour changed, but I’d really need 3 colours to do it justice anyway. I do like how the hat and colour change turned out. Also, an axe is extremely hard to make out of paper.