Origami Tanteidan’s 15th Crease Pattern Challenge in issue #69 is Satoshi Kamiya’s Archaeopteryx. It’s a fun model to fold, and another I like to make a lot. It does tend to be top heavy though (which is why its tail is pinned down in the pictures). 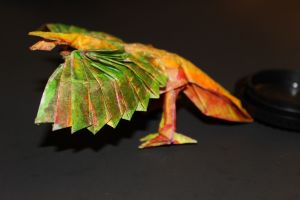 I mentioned before that Satoshi Kamiya has a really nice website, but the Archaeopteryx isn’t in his gallery (it’s only found buried in his bibliography page). I’m pretty sure this is an oversight, but I kind of wonder if Origami Tanteidan has some sort of exclusive (they have a page for his archaeopteryx here).

He also has a page of random crease patterns. A fairly long time ago (back when his website looked completely different), I noticed something pretty cool about the patterns here. Some of them are already associated with models. If you use “Copy Image Location”, the web address you get is similar to his gallery pages, just with “_c.jpg” at the end of the model number. If you delete that part, some (not all) will lead you to the gallery page of the model. For instance, the first one is his Unicorn 2.0.

I also found that this can work both ways. For instance, his Caribus (2.1 and 2.2) have the crease patterns stored at his website. You can find them by going to those pages, deleting “.html”, and adding “_c” to the end of the address (you don’t need the “.jpg”, which is good, because some of the crease patterns are saved as pngs).

I tried the 2.2 Caribu a while ago. I had some problems with the face, but I think the hooves and antlers came out pretty good. 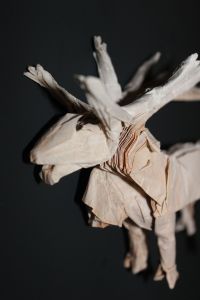 I just recently tried the 2.1 Caribu, which also yielded odd results. I think I somehow flipped the head, or something. But there were parts I already liked that I had done, so I just improvised. 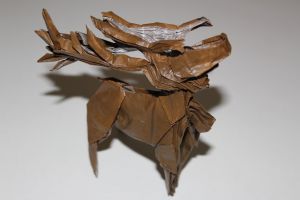 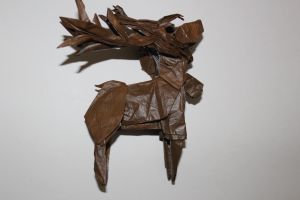 He got a much dopier head and nose, then a bigger body because I liked how he had kind of cascading fur, and finally the hooves got axed as they would have shortened the legs too much with the bigger body.

Also, this web logging thing is pretty interesting. I just figured out the “set featured image” thing and went back doing that a bit. Yay! I still can’t get the pictures in this post to arrange well with the different dimensions. Oh well.