It’s been awhile since I posted stuff. Guess I had holiday blues.

Anyway, Crease Pattern Challenge #54 in Origami Tanteidan Magazine Issue 110 is titled “No Eating!” and is a Sea Bream by Tomosuke Igarashi. I made sure that link is big so you can follow it to see what the final model should look like, because you sure aren’t gonna see it here. It’s on the cover of the second entry, not the first, so scroll down.

I’ve talked/complained that some origami models are less suited to crease patterns than others. The thing is: most crease patterns must leave off some of the smaller details to not be a mess. This can be a good thing, as solving or improvising these details can allow different people to add individuality to a model. 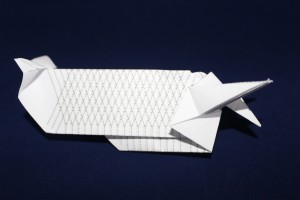 I folded all the lines other than the texture pleats (and I’m able to fold pleats), so I’m calling this done. In case you’re wondering, I haven’t been stuck on this one like I do with geometric models (like Ikegami’s Snowflake Curve). I made it and called it awhile ago. Maybe I could get more out of it if I could read Japanese, but I doubt it.