Satoshi Kamiya has some of the best origami in the world, and his Ryuuzin (Dragon God) is one of the most well know. For the Ryuuzin and several other projects, he has version numbers for each of his major improvements to the model. The following are my attempts at folding some of the released crease patterns.

I’m not sure if this really counts as one, but the Dragon of Emperor has a very similar head to the Ryuuzin on his website. Since all the other Ryuuzin are versions 2 or above, I always assumed this was either a prototype or version 1. There used to be a random crease pattern section on Kamiya’s website (it might still be there, just not in the same place), and this was one of those crease patterns. 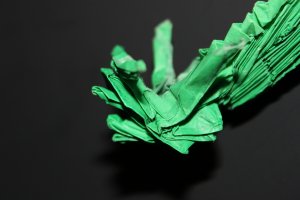 The 2.1 Ryuuzin shows what makes this model special. The entire body of the model is covered in scales. Both the scaled skin and length are achieved by an ingenious design. This can be seen on the crease pattern at the bottom of the above link. The top right corner is the head and the bottom right corner is the tail. The scales run across the top and bottom edges, and the middle of the model is collapsed. This means the top and bottom edges on the left side of the model meet in the middle and allow a much longer dragon.

I had though I had folded a 3.1, but now I can’t even find a crease pattern for it. If I had folded one, I’ve probably given it away by now. You can have a look at Satoshi Kamiya’s original here: Ryu Jin 3.1

The most recent version is 3.5, and its crease pattern wasn’t released until Kamiya’s Challenge book in 2010 (not counting exhibitions). It’s quite detailed (the crease pattern had to be put on the inside of the book jacket), and the book has some tips on folding portions of the dragon, such as the scales. This model took me quite a while, and I didn’t even articulate all of the scales.

For all of these models, the most complex part is probably the head. The body is more daunting than difficult, so you just have to be patient (or very stubborn). 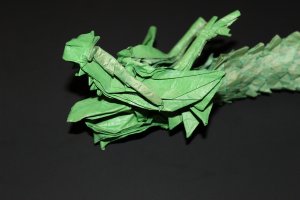