Here are a couple more origami I designed.

Awhile ago, I was at a game shop that specialized in little miniature dudes for Warhammer 40k and the such. I didn’t want to get into another hobby, but I did pick up a little mindflayer guy to put on my desk. They’re like priests, with the long robes and magic, with squid or octopus heads. They’re also in a lot of video games. Eventually, I thought he might make good origami. 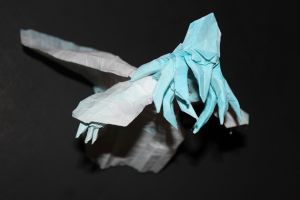 I think I could have defined the hands better, but I like them this way because they kind of look like tentacles. His head is more squid like, which is more like the ones in Final Fantasy games than most other interpretations. 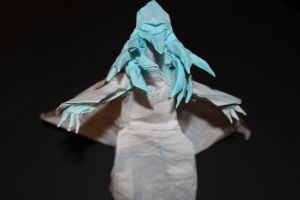 Much more recently, I came up with a Kobold. I found out a friend of mine plays a Dungeons and Dragons game online, and I asked him what he thought would be a good monster in origami. When he said “a Kobold”, we were on completely different pages. I was thinking something wolf-like, but, because it’s an older, vaguely defined mythological creature, it has a lot of forms, some of which shape-shift. 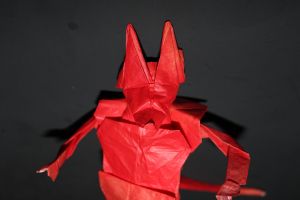 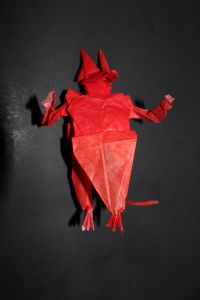 The D&D version is more dragon-like, and mine is based on the 5th edition version. I eventually designed the one above but accidentally ended up with an extra pair of limbs. I thought I could make the extra paper be belts and stuff, but it just looked bulky. It bugged me enough that I changed the design and added fingers. The tail ended up really long, but I think I like this version. 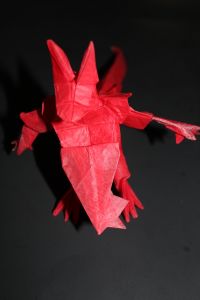