I’ve probably already said, but, whenever I make instructions for an origami model, the model is updated and changed. Here’s the more structurally uniform Archdemon!

This is one of the models that looks better with specific painting for the different aspects. Because painting after folding can be difficult and cause the model to stick to itself, I made an additional page of instructions for pre-painting this time.

I don’t actually know if anyone is interested in folding archdemons (or most of what I come up with, really), so the instructions aren’t here right now. I mostly make diagrams because I’m afraid I’ll forget how I did it. I can make lots of archdemons now!

Mostly unrelated, I updated the scorpion.

I’ve wanted to come up with an ork or balrog or something like that for awhile. Eventually, I came up with a good and flexible way to make the head of something like an ork. By flexible, I mean I can add extra tusks or horns or whatever pointy things I want to pretty easily. 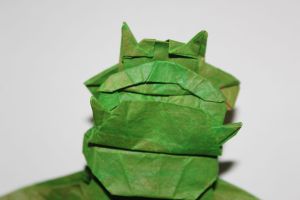 This made it so I had to decide where the best place to put the head would be (i.e. location in the paper; I know the head should go on the neck). At the same, time I needed to solve a good body. 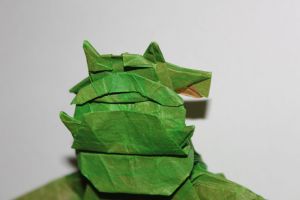 This first finished one is kind of cartoony, but I think he looks pretty good. However, it’s bugging me that I’ve seen a cartoon or a video game with a monster just like this one. I thought it looked like the artwork to a moblin from The Legend of Zelda, or an ork from one of the cartoon Lord of the Rings movies (LotR, RotK), but neither of these are the cartoon I remember.

The second one I came up with I’m calling a Devil Ork. This is because he looks a bit like Jun Maekawa’s Devil (I folded the Devil again to check, and the only thing similar is the tail’s triangle). When I stood him up, the first finished one looked like he was posing like Hojyo Takashi’s Vajrapani (Growling Form?). While I’m sure it’s just in my head, it makes me really happy for some reason. 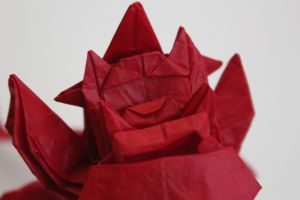 I didn’t want to forget how to make this one (a few parts were a bit tricky), so I went a bit nuts making extras in a lighter red, yellow, green, and blue. 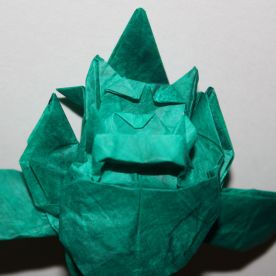 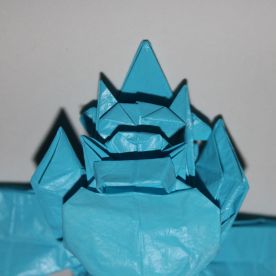 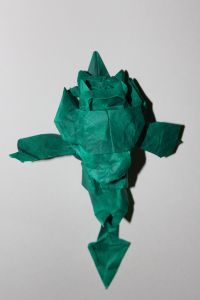 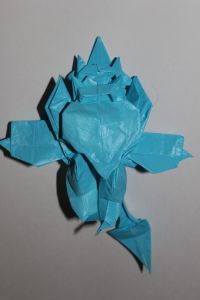 I also came up with a balrog, but I’ll save that for later.

I missed one last week and have had a lot of posts of Kamiya models, so here’s another post with a different designer. 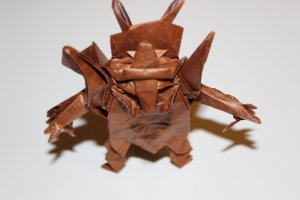 Jun Maekawa has some great (as well as famous) models and was chosen for Tanteidan’s second Crease Pattern Challenge (Issue 56). This Devil has also been diagramed in several books. I think the crease pattern version is a little more streamlined, but it may just be easier to fold than when diagramed (some models are that way you know). 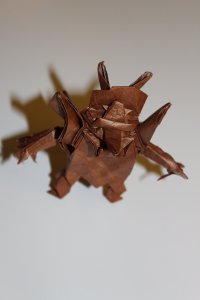 His Devil is extremely popular, with some other designers coming up with variations of it. He has some of his own variations in the book “Viva! Origami”, such as the Oni above. 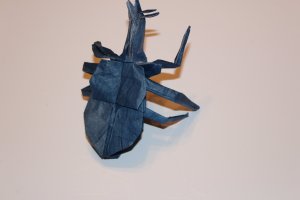 These are not from the crease pattern challenge, but I thought it might be fun to include these Samurai Helmet Beetles (which are also designed by Mr. Maekawa). The earlier one is shown above, while examples of his Flying Samurai Helmet Beetle are below. Diagrams for the flying one can be found in the book “Genuine Origami”. I really like the flying one and almost have it memorized.